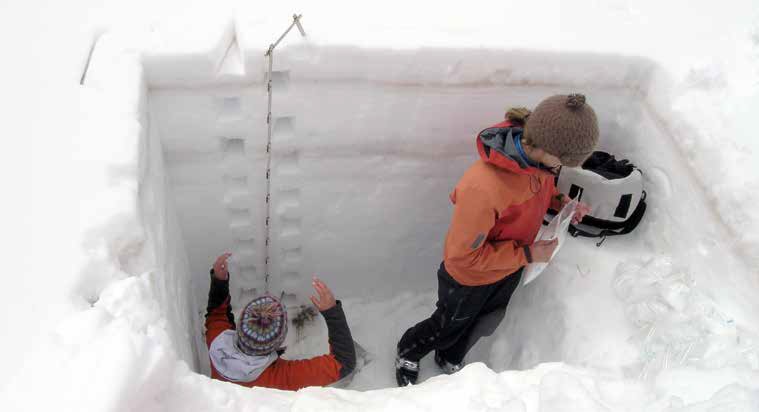 University of Utah graduate students Annie Bryant (left) and McKenzie Skiles collected dust samples from a snowpit at Rabbit Ears Pass between Kremmling and Steamboat Springs in 2010. Dust events, which can cause snow to melt faster, leave behind dark layers in the snowpack. Photo courtesy of: Center for Snow and Avalanche Studies

“Colorado’s mountain snowpacks are the first and foremost reservoir for Colorado water supplies,” says Chris Landry, executive director for the Silverton- based Center for Snow and Avalanche Studies.

Most of Colorado’s water supplies are first banked as snowpack before they flow into constructed reservoirs. That natural snow bank is beginning to face pressures, creating challenges for Colorado’s people, environment and water managers.

Between 60 percent and 90 percent of the water used in the western United States is mountain runoff, says Mark Williams, a researcher at the Institute of Alpine and Arctic Research at the University of Colorado. At Williams’ research station on Niwot Ridge, 20 miles west of Boulder, 87 percent of annual precipitation falls as snow.

“If we had rain instead of snow during the winter, it would just run off and leave our system,” explains Williams. Instead, snowpack accumulates and remains frozen in the mountains all winter, melting throughout the spring and summer and feeding rivers. By the end of June, only half the snow at Niwot Ridge is gone, with plenty remaining to melt in July and August, when summer temperatures heighten irrigation demands for lawns and crops. “That water is released from the snowpack when we need it the most,” Williams says.

According to a 2012 U.S. Geological Survey study based in part on Williams’ research, however, Colorado snow is melting—and fueling peak runoff—two to three weeks earlier than it did in the 1970s. Changes are related to warming climate trends and are additionally affected by phenomena such as “dust on snow” and heightened evapotranspiration rates for forest plants. All causes lead to the same effect—earlier and possibly reduced runoff. 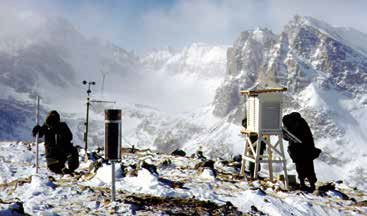 Researchers take climate measurements near an elevation of 12,000 feet on Niwot Ridge, 20 miles west of Boulder, in the 1950s. Photo courtesy of: John Marr and the Niwot Ridge LTER program archives

When Colorado’s snow melts early, water comes to people and water managers before it can be fully put to use. Reservoirs and water storage can help trap and hold water for use later in the year. But Williams believes reservoirs aren’t enough to ease concern surrounding overall reduced runoff: “We can’t engineer our way out of it through the construction of new dams.”

Impacts reach beyond water managers—forests can’t intentionally bank water. When snow melts early, water may run off before forest vegetation can use it; then soils dry out. “Your fire danger just goes through the roof,” Williams says.

Compounding the effect of early snowmelt on water supply, plant activity may also begin earlier, resulting in increased evapotranspiration; plants release more water to the atmosphere, further reducing runoff. A 2010 study coauthored by Landry found that runoff was decreased by about 5 percent when plants became active earlier in the year.

Another contributing factor is what’s known as dust on snow. The Center for Snow and Avalanche Studies’ data show as many as three to 12 dust events each year. When dust from lands disturbed by agriculture or development settles on snow, the dark layer absorbs more of the sun’s heat, reduces reflectivity and causes snow to melt faster. Landry and others, including Brad Udall at the University of Colorado’s Western Water Assessment, have shown that dust is a factor in early and rapid runoff. The amount of dust settling on the Rocky Mountains, according to their joint report published in the 2010 Proceedings of the National Academy of Sciences, has increased over the past 150 years by as much as 600 percent.

Temperature, snow depth, snow water equivalents, radiation and other factors all play a role in early or reduced runoff as well. When there just plain isn’t a lot of snow, for example, snow melts earlier. “Precipitation is still the principle factor determining snowmelt behavior,” Landry says. “First and foremost you have to have a snowpack.”