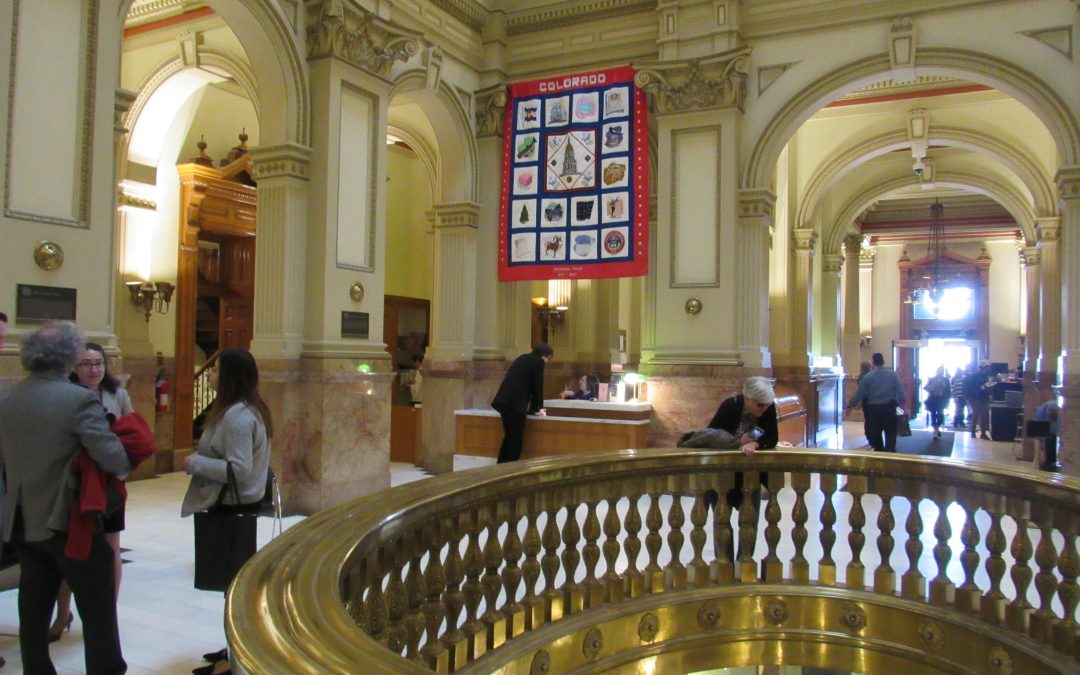 Lawmakers and visitors fill the rotunda at the State Capitol on Tuesday March 12. Credit: Jerd Smith

Colorado lawmakers have moved forward with several key water measures so far this session, including one that streamlines a key funding mechanism for water planning and projects, another that alters the way hard-rock mine cleanups are conducted, and a third that strengthens a state program that protects water for environmental purposes in streams.

The Colorado House of Representatives passed Senate Bill 19-16 on March 11 by a 63-1 margin. The bill, sponsored in the Senate by Sen. Kerry Donovan, D-Eagle, and in the House by Rep. Daneya Esgar, D-Pueblo, changes the timing of severance tax allocations for several water programs to allow for better planning and budgeting. The state collects severance taxes from oil and gas production and other extractive industries, some of which is used to support water-related activities.

Currently the state’s severance tax revenue is transferred three times a year to the Colorado Water Conservation Board based on revenue forecasts; if the actual tax collections are below forecasts (which is often the case), some already-distributed funds have to be taken back. Senate Bill 19-16 bases allocations on the amount collected in the previous fiscal year and consolidates three payments into one for distribution the following year. Because tax collections in 2018 exceeded forecasts, there is sufficient revenue available to avoid any gap in funding as the new methodology moves forward.

The Senate passed the bill in January and it now goes to the Governor for final action.

The Colorado Senate Agriculture & Natural Resources Committee approved House Bill 19-1113, concerning the protection of water quality from the impacts of hard-rock mining, on March 7. The bill, sponsored by Rep. Dylan Roberts, D-Eagle, would require reclamation plans for new or amended hard-rock mining permits to demonstrate a “reasonably foreseeable end date” for water quality treatment to ensure compliance with water quality standards. The bill also would eliminate the option of “self-bonding”—an audited financial statement that the mine operator has sufficient assets to meet reclamation responsibilities—and require a bond from another entity or other financial assurance to guarantee adequate funds to protect water quality, including treatment and monitoring costs.

The bill is designed to protect Colorado from shouldering mine cleanup costs if mining companies go bankrupt and can’t fulfill their obligations to conduct the cleanup work, much of which must go on continuously once mining activities have ceased, according to Josh Kuhn, a water advocate at Conservation Colorado.

This is just one of nearly 50 mines whose runoff is being actively treated in Colorado, according to the Colorado Division of Reclamation, Mining and Safety. In addition, nearly 1,650 of the state’s streams are believed to have mining-related water quality issues.

The committee unanimously approved an amendment that removed a potential disincentive for “good samaritans” to engage in reclamation activities.

It defeated two other amendments on 3-2 votes. The first would have limited the bill’s application to new mining permits only and not to amendments of existing permits. The second would have allowed the continued use of self-bonding and increased the financial assurance requirements of such bonds.

In prior years, the Colorado Mining Association actively opposed the bill. But this year it has softened that stance, according to CMA President Stan Dempsey. Dempsey said his organization doesn’t believe the bill is necessary, but that some changes in wording around how long cleanup work will take made his group comfortable in refraining from taking a position.

“We’ve been talking to the proponents and the state trying to arrive at a place where we can essentially say we’re neutral,” Dempsey said.

If approved by the Senate, the bill will go back to the House of Representatives — which passed it on Feb. 7 — for agreement with any amendments.

Later this month, the House will consider House Bill 19-1218, which will extend the number of years agricultural water can be loaned to streams for environmental purposes. The bill will allow loans for up to five years in any given 10-year period, up from three now, and allow three separate 10-year loan periods.

The modifications would be to the Colorado Water Conservation Board’s instream flow program, which allows the state to hold water rights, either permanently or temporarily, that keep water in streams to benefit the environment.

Sponsored by Rep. Dylan Roberts, the bill is slated to be heard before the House Agriculture and Natural Resources Committee March 25.