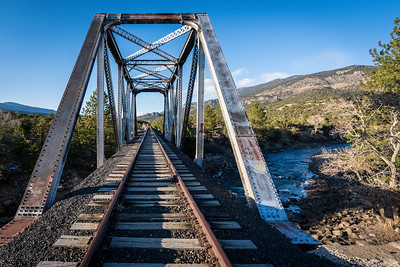 Arkansas River in Chaffee County. Nestlé is asking to continue exporting water from Chaffee County as locals ask to be "unbottled." Credit: Wikipedia

Bottled water company Nestlé is seeking permission to extend its operations in Colorado’s Chaffee County, a move that is generating significant community opposition.

Nestlé Waters North America first won permission to export spring water from Chaffee County in 2009, building a pipeline and trucking the water to Denver where it is packaged.

The company hopes to renew its original 10-year permit to tap Ruby Mountain Springs near Buena Vista, which expired last fall. The water is sold under the Arrowhead brand.

Chaffee County Commissioners are expected to take up the matter at an Oct. 20 hearing.

Nestlé Natural Resources Manager Larry Lawrence declined an interview request, but in an email said the company strives to maintain environmentally sensitive operations and that extending the permit would create no new stress on the springs.

Separately company officials have said repeatedly that preserving water resources is key to their ability to continue selling water. The beverage maker has 25 plants in the United States, including the one in Colorado.

In the meantime, local activists have collected more than 1,200 signatures on Change.org opposing the permit extension.

Unbottle and Protect Chaffee County Water, with 300-plus members, said the permit renewal poses an ongoing threat to local water supplies due to chronic drought and climate change. Activists also say that Nestlé donations of bottled water to local nonprofits increases the county’s recycling costs, and that Nestlé has not followed through on some of the commitments it made to the county, including taking steps to preserve important property along the Arkansas River near the springs.

“We believe we are an environmentally sensitive county,” said Francie Bomer, one of the activists leading the effort to cancel the permit.

“We don’t like plastic and we don’t believe the benefit to the county is equal to the value of the water Nestlé is taking out,” Bomer said.

The conflict comes as bottled water manufacturers across the U.S and Canada face mounting criticism over their use of groundwater. Five states, Maine, Michigan, Montana, Oregon, and Washington, are moving to ban or sharply limit the industry.

Earlier this year Nestlé opted to sell its Canadian operations, exiting a country in which local opposition had grown strong, according to published reports.

Under its Chaffee County permit, Nestlé is required to monitor water levels in the Ruby Mountain Springs and to replace any water it takes under a replacement plan overseen by the Salida-based Upper Arkansas Water Conservancy District.

Such plans are often required under state law, and are designed to ensure water users downstream of diversion sites with more senior water rights aren’t harmed by upstream diversions.

Manager of the Upper Arkansas Water District, Terry Scanga, said the replacement plan relies on water from Turquoise Lake in Leadville, which fully covers any water removed from Chaffee County by Nestlé. Scanga said the district has no plans to contest the permit renewal.

Nestlé is required to monitor water levels and habitat conditions as part of its agreement with the county. In its 2019 annual report, the company said it extracted 89 acre-feet of spring water, 5.6 percent of the 1,573 acre-feet of overall flow measured. An acre-foot is equal to nearly 326,000 gallons.

If its permit is renewed, the company estimates annual production would grow at 2 percent annually, but would still be well below the amount to which it is legally entitled.

In addition, ongoing monitoring by the company shows that the spring recovers quickly as water is extracted and that no harm to habitat has been noted since 2010.

“To date, spring water production has been well below the permit limitations and at no time over the last decade of monitoring has stress to the spring system resulted in conditions where pumping was required to be reduced, either to meet criteria under the permit or due to observations that indicated operations were negatively impacting upstream or downstream users or the ecological and biological systems,” the report states.

Bomer is skeptical of those reports because they have not been independently verified by outside experts.

Earlier this year, in advance of the permit renewal effort, the county hired experts to evaluate Nestlé monitoring data, according to Chaffee County Attorney Jennifer Davis.

Whether Chaffee County will become another bottled water hot spot in the international battle isn’t clear yet.

“We are a tiny county. Are we part of that bigger effort? No. We’re just trying to protect our resources so they will be here when we need them,” Bomer said. “But if we contribute to to that effort, that would be okay.”