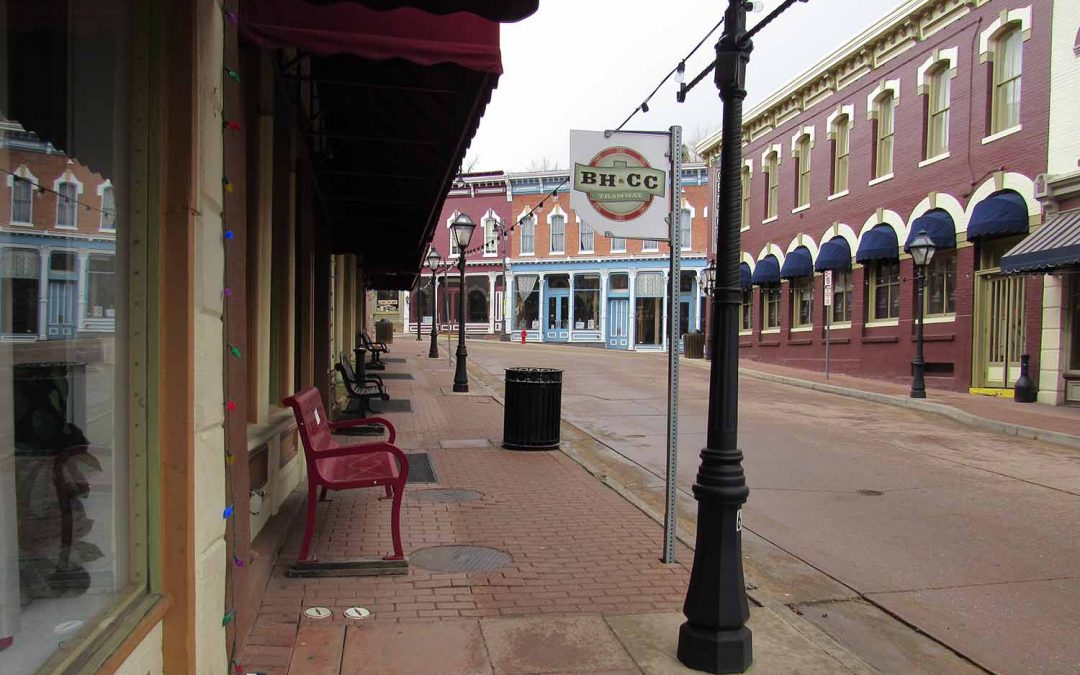 Streets are empty in Central City, with casinos shuttered and hundreds of workers laid off. The pandemic is bad news for the state's new sports-betting tax, which was to have helped fund the Colorado Water Plan. April 21, 2020. Credit: Jerd Smith

It’s hard to generate money from a sports-betting tax when COVID-19 has wiped all athletes worldwide from the fields, courts and stadiums where they would normally play.

And that’s a problem for the Colorado Water Plan, a 2015 citizen-backed guide for helping Colorado stave off future water shortages and protect the environment while sustaining agriculture and other heavily water-dependent parts of the economy.

Tax revenues from the new gambling initiative, slated largely to help fund the plan, were initially expected to start streaming in later this year, after the May 1 start of newly legalized sports betting here.

But one look at the empty streets and shuttered casinos in Black Hawk and Central City makes clear that the future of sports betting and its promised tax revenues are uncertain at best, at least in the near term. 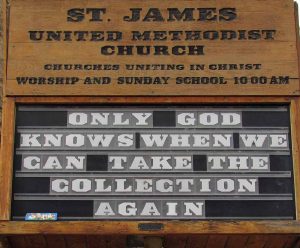 The pain from the pandemic is clear in Central City, where a church message board poses the question everyone is asking: When will things return to normal? April 21, 2020. Credit: Jerd Smith

Estimates presented to the legislature late last year, after voters approved Proposition DD in November, indicated that the new tax might generate as much as $9.6 million in its first full year of operation, enough to pay for regulatory and administrative costs, and provide perhaps as much as $6.3 million for the Colorado Water Plan.

That’s a fraction of the $100 million or so water officials believe it would cost to fully fund the plan on an annual basis, but it was an important first step in setting up a sustainable source of revenue.

Those early revenue numbers are out the window now, however, thanks largely to the pandemic.

But sports-betting revenue estimates were in trouble even before COVID-19 shut down sports.

By late December, the Department of Revenue had determined that the license fees on which revenue estimates had been partially based originally were set too high and would have to be brought down significantly, from $125,000 to roughly $1,200, according to the Division of Gaming.

“The Department’s internal revenue expectations are much lower than [the earlier] fiscal note estimates,” according to a Department of Revenue report to the legislature dated Dec. 19, 2019.

Sports-betting revenue could have been a bright spot this year, when the state budget is facing an estimated $2 billion budget deficit, one roughly twice as high as that generated during the Great Recession of 2008 to 2010.

Dan Hartman, director of Colorado’s Division of Gaming, said there are too many unknowns right now to predict what, if any, revenue the sports tax might generate this year.

Whether even the lower $1.5 million revenue estimate will hold is unclear, he said. “That’s going to depend on how quickly people come back. We just have to wait and see. I’m hoping it’s a lot more.”

But Hartman said the Division of Gaming did approve a new operations fee, which will at least cover the cost of overseeing betting.

“While we didn’t get those license fees that were written into statute, we did impose a fee [on operators] that takes the cost of regulation out of the tax money,” Hartman said. “So whatever tax money comes in will all go to the beneficiaries,” including the water plan and gambling addiction programs.

How much state money, if any, can be salvaged elsewhere for the water plan this year isn’t clear.

The Colorado Water Conservation Board (CWCB), which implements the plan, also receives funding from tax revenues generated by oil and gas production and those funds have helped pay for water plan programs. But that money is drying up as well due to the crash in oil markets. Because those revenues don’t flow to the CWCB in the year in which they’re received, their loss won’t hit the CWCB until the next fiscal year, which begins July 1, 2021, according to the Joint Budget Committee.

State agencies are expected to have a clearer picture of how much cash they will have to operate with once the Joint Budget Committee finishes work on a revised spending plan in early May. Until then each is evaluating various alternatives, officials said.

Becky Mitchell, executive director of the CWCB, said the agency hadn’t planned on big cash from the sports-betting tax anytime soon and that the news wouldn’t deter her staff from continuing to implement the plan.

“Just because we don’t have [that additional] money, doesn’t mean we stop working. It means we up our game,” she said.