From Dam Builder to Water Manager 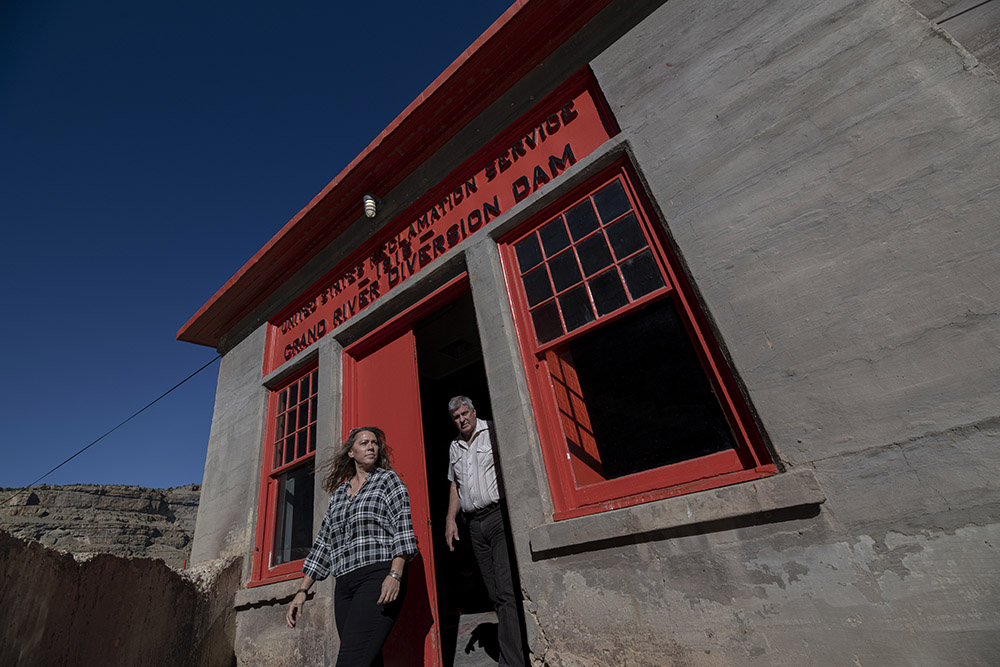 Tina Bergonzini, manager of the Grand Valley Water Users Association (GVWUA), and Ed Warner, area manager for the U.S. Bureau of Reclamation’s Western Colorado Area Office, meet at the Cameo Diversion Dam, commonly known as the “roller dam.” While Reclamation owns the dam, the GVWUA operates it along with the Government Highline Canal to provide irrigation water to more than 23,000 acres of farm and ranch land in the Grand Valley. Photo by William Woody

The U.S. Bureau of Reclamation’s future in Western Water won’t look like the past

While not all water users in Colorado rely on federal infrastructure, many do. U.S. Bureau of Reclamation projects provide water to some 40% of Coloradans and irrigate more than 1 million acres of agricultural land across the state. These federal projects serve a variety of purposes. They move water from where it originates to where it gets used, store it until it’s needed, or slow and detain stormwater to protect communities from flooding.

Many of those projects are owned by Reclamation, which tallies more than 600 miles of pipelines, canals, reservoirs and other infrastructure across Colorado. The agency says their reservoirs in Colorado have a total water storage capacity of about 4 million acre-feet — about half of the state’s overall reservoir capacity. The actual amount of water stored varies throughout the season and year-to-year.

Reclamation’s water projects allowed for the development of the West as we know it – for urban populations to grow where they have and for rural farmers and ranchers to access water needed for their agricultural operations. But over the past 120 years the agency’s role has shifted from water developer to manager. Now climate change could be brewing the agency’s next evolution, making many wonder what its future, and the future operation of its water projects, will look like.

“There’s an uncertainty for everyone,” says Steve Pope, manager of the Uncompahgre Valley Water Users Association (UVWUA), which operates the Uncompahgre Project, a Reclamation project that pipes water from the Gunnison River to the Uncompahgre River, serving more than 76,000 acres of farmland around Montrose and Delta on Colorado’s Western Slope. “We’re solely at the mercy of whatever Mother Nature provides us.”

For 15 of the past 20 years the Uncompahgre system has operated on below-average flows — distributing 70% of shareholders’ allocations last year and just 50% in 2002. UVWUA doesn’t have reliable large reservoir storage above them to store and buffer flows, which makes low-water years hit hard. “We have to live with whatever we’re given,” Pope says.

His system isn’t alone. The western United States is suffering from two decades of drought and aridification due to climate change. River flows have shrunk, and experts say water availability will continue to decline. Meanwhile, all states in the Colorado River Basin are facing a crisis as demand for water has outpaced supply, leading to historic low levels in the nation’s largest reservoirs, Lake Powell and Lake Mead.

Over the past two summers, in 2021 and 2022, Reclamation ordered water releases totaling some 650,000 acre-feet from its Upper Colorado River Basin reservoirs — Flaming Gorge in Utah, Navajo in New Mexico, and Blue Mesa and the other Aspinall Unit reservoirs in Colorado — to boost water levels in the bigger downstream reservoirs. To further stabilize the system, it also held back water in Lake Powell that would have normally been released to Lake Mead and called for all the states in the basin to develop a plan to conserve an additional 2 million to 4 million acre-feet of water, a significant amount that left many water users very concerned.

Reclamation’s August 16, 2022 deadline for the states to develop such a conservation plan passed without consequence, and the states continue to work with the agency toward that goal. But as water levels continue to fall, water users continue to express concern that they could soon be required to use less water.

“I don’t think it’s ever going to go away,” Pope says of the risk to water users and worry as Colorado River system water levels continue to drop. “What makes us concerned is where is this going to come from? If [federal officials] say we’re going to cut 20% next year, we’re going to cut 20% of what? That’s my concern. Having a bad year and needing to make additional cuts.”

But Pope’s system and others also face the added risk of relying on Reclamation-owned water rights and infrastructure. “That creates the uncertainty,” he says. “Do they have the ability to say ‘Hey, you can’t use your water this year’? We don’t know. I don’t think they’re going to take that approach but because we don’t control anything, it certainly gives us some concern.”

Reclamation and development of the West

Reclamation’s footprint in Colorado began in 1903, the year after the agency’s creation. According to the agency’s senior historian, Dr. Andrew Gahan, “Reclamation was designed to aid in settlement of the American West through the construction of irrigation facilities.” 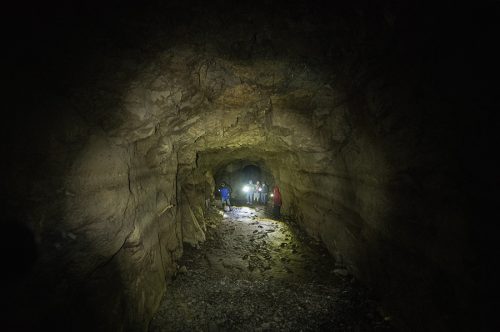 Its first project in the state did just that. The Uncompahgre Project was completed in 1909, and at the time, its Gunnison Tunnel was the longest irrigation tunnel in the world. Also built in the early 1900s was the Grand Valley Project, which diverts Colorado River water into an extensive network of canals and ditches, now serving more than 30,000 acres of vineyards, orchards and other operations in the agricultural area around Grand Junction.

Those seminal projects, while still responsible for irrigating much West Slope agriculture, are dwarfed by what came later, during what Gahan refers to as the “big dam era.” That’s when Reclamation built the Colorado-Big Thompson Project (C-BT), completed in 1956, and the Fryingpan-Arkansas Project (Fry-Ark), completed in 1982, which, taken together, today serve more than 1.9 million people and 800,000 irrigated acres. Proponents of these projects — the Northern Colorado Water Conservancy District for the C-BT Project, and the Southeastern Colorado Water Conservancy District for the Fry-Ark Project — contracted with Reclamation, agreeing to pay back a portion of the project’s cost over time. Today those conservancy districts help manage the projects though Reclamation owns the infrastructure. Gahan says that the big dam era, which ran from approximately the 1920s to the 1970s, was characterized by complex, multi-purpose projects, including extensive investments in hydropower, which helped offset project costs.

Even during this project-building era, people realized that these reservoirs came with environmental and social tradeoffs. Both the C-BT and Fry-Ark projects move water from the Colorado River Basin to the eastern side of the state through complex systems of diversions, transbasin tunnels, pumps, power plants, reservoirs and canals. They supported the growth of Colorado’s Front Range by bringing supplemental water to the drier, more populous part of the state — water that originated on the Western Slope and no longer flows farther downstream from its diversion points in those rivers. In the 1930s, Colorado set guidelines that these transbasin projects create compensatory storage in the form of West Slope reservoirs to mitigate their impacts on present and future West Slope development. Reclamation built those compensatory reservoirs too, along with the project proponents, often as the first piece of a transbasin project. For the Fry-Ark Project there’s Ruedi Reservoir, and the C-BT provided Green Mountain Reservoir for compensatory storage.

Complex water projects like these became harder to authorize by the 1970s, largely due to “a developing environmental consciousness in the United States,” explains Gahan. “This is where you see a bevy of environmentally centered acts passed by Congress.” Chief among them was NEPA, the National Environmental Policy Act, but this period also saw passage of the Endangered Species Act, the Wild and Scenic Rivers Act and the Clean Water Act. This ushered in the “water management era,” as Gahan calls it, when Reclamation’s focus shifted away from building so many new projects and toward managing them.

Managing water resources into the future

Today, Reclamation’s management role takes many forms, from maintaining infrastructure to working alongside partners as they plan and design updates to projects, line canals to improve efficiency and manage water quality impacts, and much more.

“They’re like having a good partner who knows just as much about your business as you do,” says Tina Bergonzini, general manager of the Grand Valley Water Users Association, which works with Reclamation on the Grand Valley Project. “From my perspective, Reclamation has been an excellent partner.”

While Reclamation doesn’t have plans for major additions to its systems beyond the components that were originally authorized by Congress, project partners do, says Jeff Rieker, area manager for Reclamation’s Eastern Colorado Area office.

Northern Water is currently building the new Chimney Hollow Reservoir in Larimer County, which will rely on “excess capacity” in the C-BT’s Adams Tunnel to move more Colorado River water east. It’s also working on permitting two other reservoirs on the East Slope, Glade and Galeton, as part of the Northern Integrated Supply Project. Once complete, these three reservoirs will provide Northern Water the additional storage capacity of 305,000 acre-feet.

Work is also underway on the Arkansas River, to build a pipeline delivering Fry-Ark water to the southeastern part of the state where water users have long relied on unhealthy, contaminated groundwater. This Arkansas Valley Conduit was initially part of the proposed Fry-Ark Project, but it got scaled down and cut out when communities couldn’t afford to cover the costs. Now, it’s finally becoming a reality.

Many environmentalists and scientists have looked askance at new major water projects in a time of aridification, but Northern Water says that more storage is a critical component, along with ongoing water conservation, to ensuring water security as their region’s population grows.

“Yes, we are seeing more dry years, but there are occasional years that are actually above average,” says Jeff Stahla, spokesperson for Northern Water. “Having storage available to capture those above-average precipitation years is going to be vital to help us get through what may be more of the lower precipitation years.”

“The general [storage] trend in the last few years has been downward,” says Jason Ullmann, deputy state engineer for Colorado’s Division of Water Resources. “Back-to-back dry years have an outsized influence on reservoirs, and that’s what happened, at least until this year because of the monsoon and because the snowpack wasn’t quite as bad.”

Meanwhile, the U.S. Department of the Interior and Reclamation are scrambling to protect their major infrastructure on the Colorado River, with water users reliant on that infrastructure concerned for the future and a loss of control.

“The whole gist of it is, if Reclamation decided they wanted a specific amount of water, it wouldn’t really matter if it was a reservoir or if it was a river [direct flow water] right, it’s their water,” says Bergonzini. “But from my perspective, Reclamation has been an excellent partner, they have helped Colorado agriculture so much, I really don’t see them walking away from that now.”

Rieker at Reclamation acknowledges that the future of federal involvement in Colorado River issues in the state may lead to some “difficult decisions” but that the agency’s approach doesn’t appear to be changing.

Rieker points to an August 2022 news release from Reclamation saying, “The Department’s approach will continue to seek consensus support and will be based on a continued commitment to engage with partners across the Basin states, tribes and the country of Mexico to ensure all communities that rely on the Colorado River will provide contributions toward the solutions.”

Olivia Emmer is a freelance reporter and photographer based in Carbondale, Colorado. Her writing has been featured in Fresh Water News, Aspen Daily News and The Sopris Sun. Emmer specializes in stories about the environment.