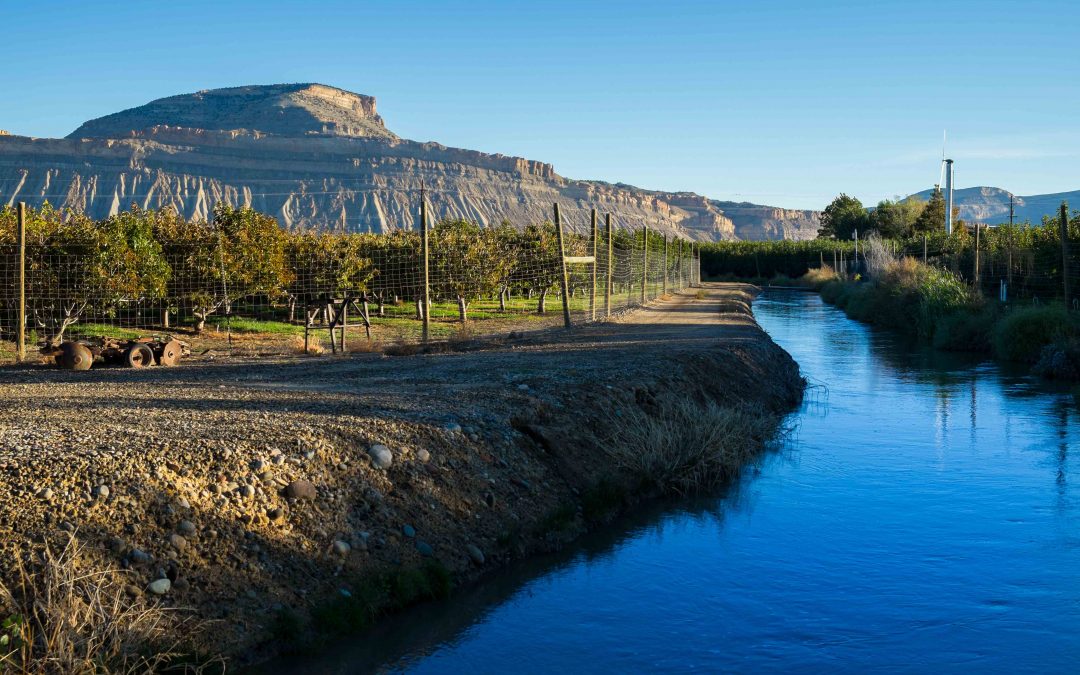 An agricultural ditch in Palisade supplies peach orchards with irrigation water, not far from the Grand Valley Power Plant. iStock

For the growers in Colorado’s $40 billion agriculture industry, every last drop of water counts. But deteriorating ditches, diversions and reservoirs mean some of that precious water may never reach the crops.

It’s something that Max Schmidt, manager of the Orchard Mesa Irrigation District in the Grand Valley, knows all too well. The district sends Colorado River water to 9,219 acres of land, including roughly 2,500 acres for peach growers, 1,000 acres for vineyards and another 3,000 acres of pasture land (the district also serves some suburban users). The district was organized in 1904 and was partially integrated into the federal government’s Grand Valley Project in 1922, with some of its key infrastructure dating back just that long.

“Our canals have operated on a shoestring budget for 100 years and now we’re paying the price,” Schmidt says. “For the last 100 years, we’ve delivered cheap, abundant water, and now there’s a lot that needs to be done.”

The Grand Valley Power Plant hydroelectric facility is almost 90 years old and Schmidt is just about ready to fully replace it (an $8 million project he’s cobbled together with grants and loans from the federal and state government, as well as private funding). The pump house was overhauled in the 1980s. But one of the biggest headaches for users is the network’s 30 miles of canals, which are so deteriorated in some spots that water just vanishes into the soil.

Lining the canals to reduce leaks or replacing stretches with pipe has been slow going. Schmidt jokes that it takes “TLC: time labor and cash,” but all are in short supply. With help from the Upper Colorado River Endangered Fish Recovery Program, the district revamped enough canals and storage to save 10,000 acre-feet of water per year. But the rest of the canals, he says, will have to wait until more money is available, and some of his agriculture users are still dealing with water losses.

For districts that can’t access the same cash, growers and farmers are left paying the price in inefficient irrigation. A 2019 survey for the Colorado Cattlemen’s Association and Partners for Western Conservation that polled more than 330 agriculture producers found the condition of water delivery infrastructure was the second most-cited concern, with 55 percent of respondents noting it.

“These problems are not dissimilar to the problems of cities,” says Greg Peterson, executive director of the Colorado Ag Water Alliance. “Every little thing makes your business less efficient and less profitable.”