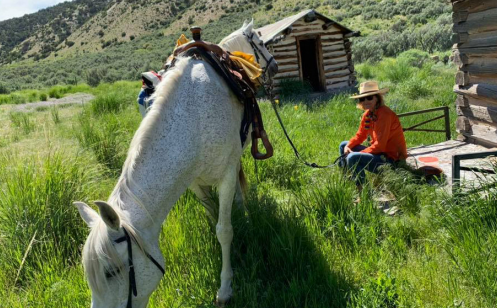 Deirdre Macnab with the 4M Ranch rests after a horseback ride. Macnab has grazing rights on land in the valley that would be inundated by the White River Storage Project's reservoir, if built. Courtesy 4M Ranch

Dierdre Macnab’s 13,000-acre 4M Ranch produces beef and hay on high desert land along the White River in Rio Blanco County. And if the Rio Blanco Water Conservancy District is successful in moving a project forward, she could soon abut a water storage site on a stretch of public land where she has grazing rights for her cattle.

The conservancy district applied for a 90,000 acre-foot water storage right in 2014 for an off-channel reservoir on the White River for the town of Rangely and the surrounding area. That was later reduced to 66,720 acre-feet for a reservoir to sit between Rangely and Meeker. Macnab says she’s not against creating more water storage and would even cede some of her land to make it happen, but not for this project.

“If you’re going to add additional storage … then it should be in a location more strategic than a flat, high-desert area that would only benefit a small population,” says Macnab, who was for a time the sole opposer to the project. The state Division of Water Resources (DWR) also filed motions opposing the project, questioning whether the conservancy district had demonstrated a clear need for the supply.

Conservancy district manager Alden Vanden Brink, however, says the reservoir is vital for the downriver communities, where there is not currently a drought contingency plan. Rio Blanco and Moffatt counties have junior water rights and the prospect of a Colorado River compact call, he says, is a “crisis getting ready to happen.” He adds that the location was one of 23 sites reviewed and was preferred by the board because it did not require inundating any private land.

A January 2021 water court settlement between DWR and the conservancy district cleared the rights for Rio Blanco’s project, although it prevents the water from being used for irrigation, endangered fish, or augmentation in the event of a compact call. The conservancy district will now begin seeking the necessary permits.

Macnab says she is disappointed but is glad she made her voice heard to protect the landscape. “The White River is a unique river in this very rural part of the state, and it’s a critical component for our quality of life here,” she says.