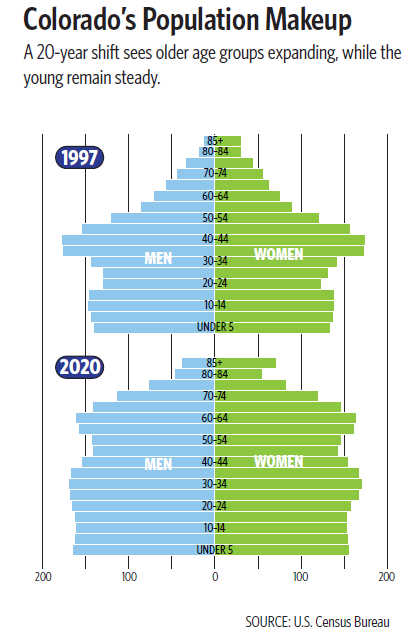 By 2030, Colorado’s senior population, or those older than 65, will skyrocket, growing by 150 percent from 2010—primarily due to aging baby boomers. The needle is already moving: The senior population increased by 32 percent between 2000 and 2010, placing Colorado fourth in the nation for growth in that age group, according to a 2012 report from the Colorado State Demography Office.

At the same time, the state’s population is the fourth-fastest growing in the nation. Some of that growth is from Coloradans’ own children, but young people from other parts of the country also flock here for jobs, the weather, the lifestyle—and that in-migration isn’t slowing. “Because we continue to migrate young people to the state, we will continue to stay relatively young,” says Colorado’s State Demographer Elizabeth Garner.

The millennial generation, which includes those between the ages of 15 to 35, already comprises more than 25 percent of Colorado’s population, making it the largest generation in the state right now. But, says Garner, “That’s not where we’re changing. We’re growing at the old end and maintaining our youth.