It’s an “Endless Summer” for surfers who seasonally flock to, and improve, Colorado rivers 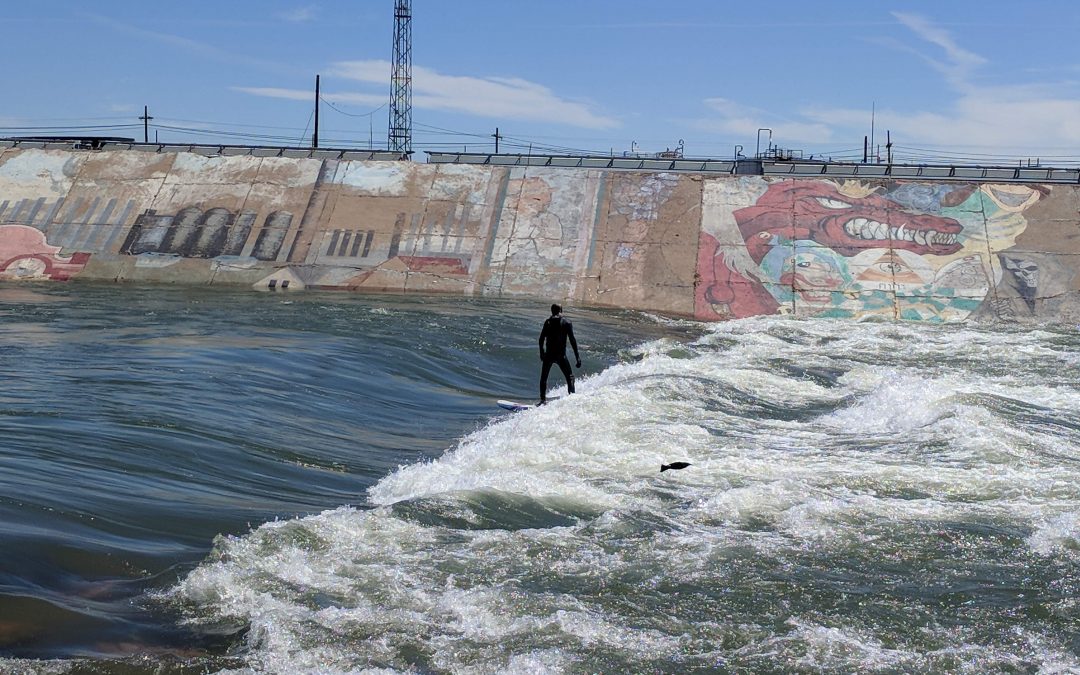 The whitewater park on the Arkansas River in downtown Pueblo was funded through a Fishing Habitat Grant.

2019 was a bumper year for recreation on Colorado Rivers. A bumper snowpack heading into summer saw record levels of snow melt raising water levels around the state. As a result, people flocked to rivers and streams to paddle, kayak and increasingly, to surf.

When you think of surfing, Maui or southern California may be locations that spring to mind. Pueblo in southern Colorado, may not, but this stretch of the Arkansas River is where a particular type of surfing began.

“Some clients of mine that were taking a kayak lesson came in and, you know, they were going to learn to kayak because they were big surfers, they had moved here and that was their only choice. And after the kayak lesson was over I went to my car and pulled out a boogie board and went down and started boogie boarding and they were all enthralled with that and they thought ‘God if you can boogie board it, you can probably surf it.’ They ran home dug out their quiver of surfboards came down and that afternoon we had river surfing in Colorado.” 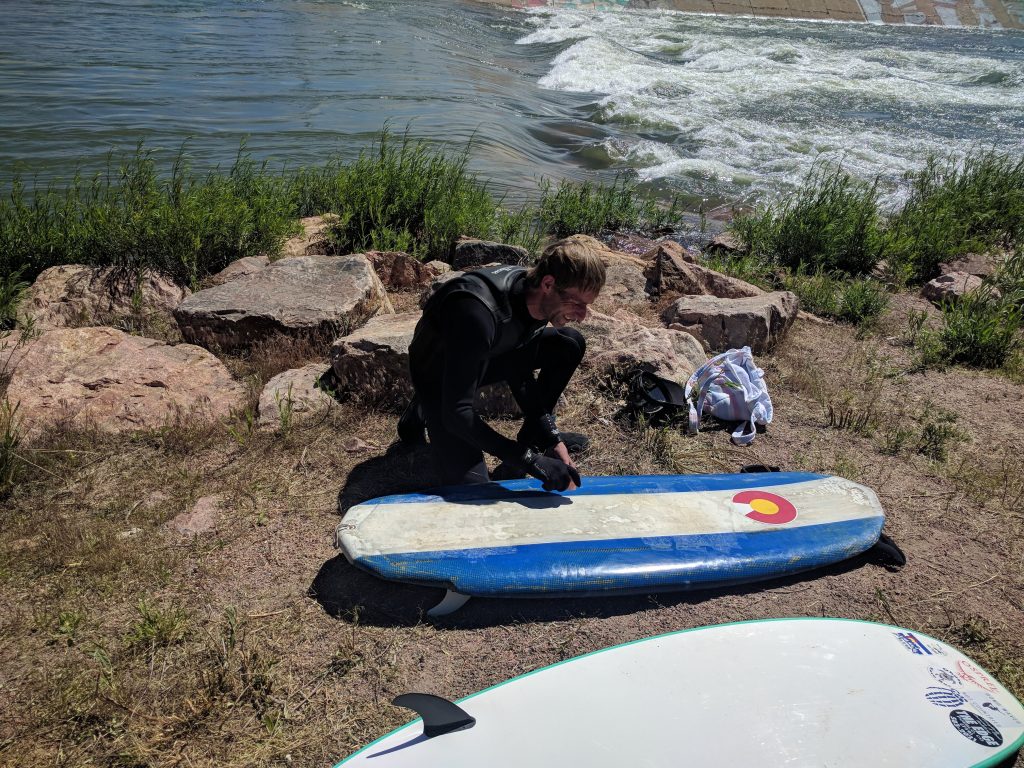 Like most river surf spots in Colorado, the waves don’t usually occur naturally. The City of Pueblo was looking at ways to improve this stretch of river for fish habitat in a way that also benefited those wanting to recreate on the river says Amanda Cesar, recreation supervisor for Public Parks and Recreation in Pueblo.

“So back in 2005 we entered in with the Corps of Engineers and GOCO for a Fishing Habitat Grant. We were awarded the grant. It was completed in 2006. And basically it was an overhead dam that was built up that was extremely dangerous. Fish couldn’t get over it. Now they have basically fish ladders which are what the rocks are, and it helps to not only help with the fishing habitat but also makes a great recreational place for all of us to play.”

It cost about $2 million says Cesar, but now the park itself brings in tourists, particularly in mid-summer for events like the Ark River Surfing Festival. This year’s festival was delayed several weeks because the water levels were actually too high in the river due to the abundant snow melt. Too much water in the river flattens out the waves and surfers just get washed down stream.

Pueblo may be considered the birthplace of river surfing here in Colorado, but now there are several surf spots throughout the state says Alex Mauer with the Colorado River Surfing Association.

“They’re popping up all over the place. Confluence Park in Denver has a couple of waves that are good for surfing. Just recently the River Run Park in Englewood Colorado, that’s probably my favorite park in Colorado so far, that’s popped up. There’s a wave in Thornton Colorado called Dave’s wave, there’s a new park that just got built in Eagle Colorado. There’s an awesome park in Glenwood Springs, that’s probably one of the most infamous waves in river surfing.”

Fort Collins is the latest community to invest in whitewater parks with a view to luring paddlers and surfers to recreate on the Poudre River.  Most whitewater parks have large boulders secured in the river bed to create the waves. Other communities are investing in cutting edge technology to lure the surfers. River Run park on the South Platte River has a mechanical WaveShaper, three adjustable steel flaps embedded in the river bottom.

This stretch of the Arkansas through Pueblo is still one of the biggest draws in the state with surfers from around the country coming to ride the waves, like professional surfer Shannon Thomas. 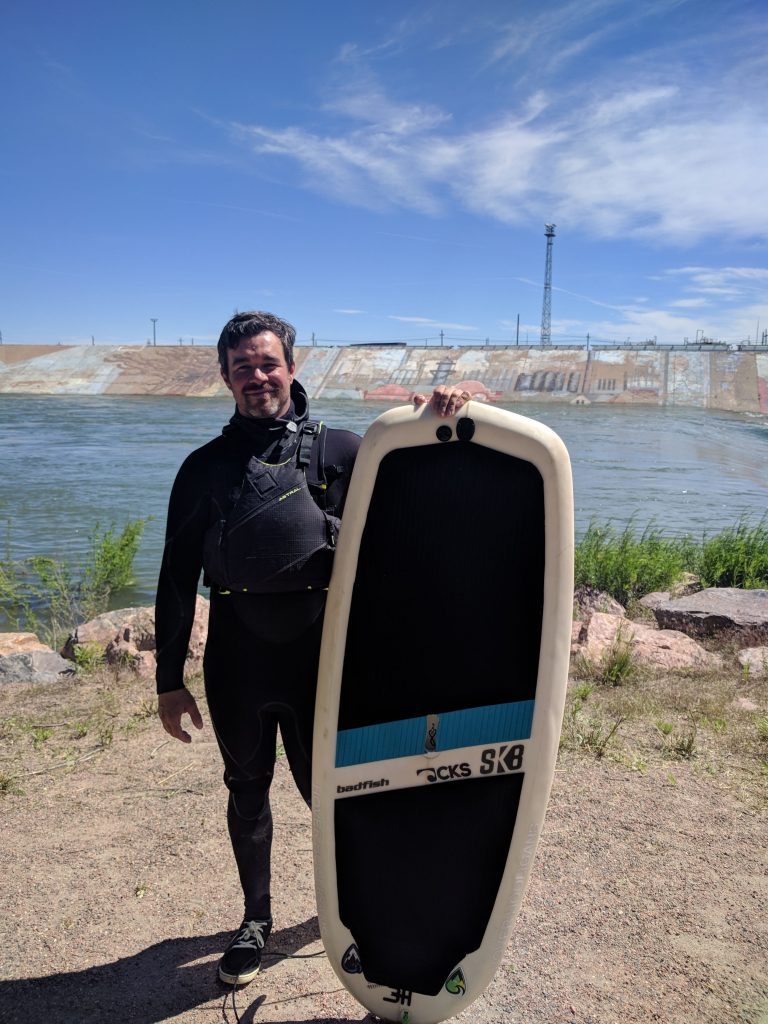 Professional surfer Shannon Thomas from Ohio surfs rivers in the summer and oceans in the winter. “As long as you can stay on the wave, you have pretty much endless surf.”

“I’m originally from Ohio. I just travel around living in my van and switch river waves and ocean waves in the wintertime.”

“Basically it’s similar to surfing an ocean wave but it’s a stationary wave so the water is rushing underneath you but you’re actually stationary. But every wave is different. There’s left and right shoulders just like an ocean wave and go left or right. And it’s kind of an endless wave too. As long as you can stay on the wave you have pretty much endless surf.”

Thomas isn’t the only one catching waves today. Ross Determan who works at Bob Walkers surf shop is waxing up his board before he launches.

“It’s the most wonderful experience you’ll ever feel there’s nothing like gliding on water.”

Water flow is crucial for the parks like this one. Colorado has a complex set of water laws that determine who gets to take water out of the river. It wasn’t until the early 1970s that the first non-consumptive water right was established—a right for water to remain in the stream, something that’s crucial for the whitewater parks. Amanda Cesar, recreation supervisor for Pueblo Parks and Recreation, says they need to work closely with the local water board to ensure there’s enough water during the peak recreation months of the summer. “We do have agreements that during peak season we can call for extra water rights, it is extremely hard because it does have to go to the board.”

There are definite monetary benefits to keeping water in rivers like this. An analysis of the Economic Benefits of Maintaining Peak Instream Flows in the Poudre River through Fort Collins indicated a substantial economic value to keeping water in the river as it encourages recreation. Similar analyses have been done in Golden and Durango showing millions of dollars flowing into local coffers as a direct result of recreation on rivers through the town. But having more people getting into the river also creates increased awareness of the need to reduce pollution and improve the overall health of the stream says Bob Walker of Edge Ski and Surf in Pueblo.

“I’ve already seen there’s a couple of the guys that started out as just river surfers that have formed river cleanups recycling. Brad Parsons out of Grand Junction has a whole company of river cleanup. And so I think anytime somebody starts utilizing any space and enjoying it they start taking care of it.”